Small Business Saturday lead me to think about a greater, darker problem than the overshadows that large, international corporations cast upon our family-owned shops and stores. I started thinking about red tape; not in the gift wrap, holiday sense but in the regulatory, wrist-tying, throat-choking sense.

The real crisis facing small business is the crushing weight of government regulation. Recently, the government made it their job to pursue small children and the little lemonade stands that were unregulated. Fines were issued. Summons were wrote. Cardboard stands were shut down. Georgia, Pennsylvania, Iowa, Wisconsin, Maryland and Texas have all taken part in the shutdown of unregulated fruit juice stands.

The lengthy list of government regulation goes on and on. In Philadelphia, the price of ‘free speech’ is $300 and up. In the city of ‘Brotherly Love’, bloggers must now spend $300 for a tax to blog or face prosecution. In 2011, Amish farmers were raided by the FBI to investigate the sale of unauthorized milk. It’s about time the government went after the Amish because we don’t have larger issues like domestic terrorism, financial reform, radical international terroristic cells,  or a war with tremendous casualties to address.

I wonder what Henry David Thoreau would now write in his Civil Disobedience. Perhaps he would write much of the same, as it most all still applies. Perhaps it would be longer. Today everything is longer. Obamacare is so long that  no one know what it says. The Dodd-Frank Wall Street Reform and Consumer Protection Act is so verbally profuse that even Wikipedia can’t even write a brief account of what its all about.

A few weeks ago, I sat in a courtroom: not as a council person or board member but as a lawbreaking citizen. The girl who never had detention and always had low-grade anxiety whenever scolded, plead guilty. My crime: parking too many vehicles in our own parking lot. An ordinance was violated. I sat in a packed court room next to the lawyer for a national furniture conglomerate, also making a court appearance for similar regulatory offenses in town. As ma -and-pa business after business made their appearance before the judge, I began to wonder why the town has made it their job to drive business, small and big alike, out.

If our own towns are against us, who are for us? Soon, the only jobs left will be those of the government regulators themselves. 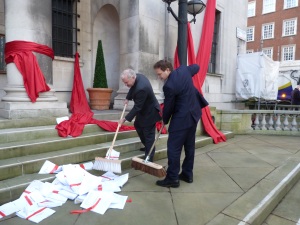 As a small business owner, I am no stranger to our friends at the IRS, the DOT,  and the Department of Labor State audits not to be confused with the Department of Labor Federal Audits. As a small business owner, I  also wear the ‘HR hat’ and often interview potential employees for hire. In the last year alone, I have heard from at least half a dozen candidates that they weren’t really interested in the job but needed to let unemployment know they were interviewing. One candidate was so kind as to explain to me that she just couldn’t afford to work. It would ruin her unemployment.

Now, I know there are a lot of good people out of work. There are many good people who want to work. Such abuses are a disgrace. A friend even asked me why I hadn’t taken the time to report these people who had inferred they were abusing the system to the authorities case-by-case. Right. As a mom of three children ages four and under and as full-time small business owner, I have the time to sit on hold for twenty minutes and be passed back and forth from phone extension to voicemail to do my ‘civic duty’ that is the job responsibility of someone employed by the government.

Idea: perhaps they should regulate the system abusers before the business owners.

Last winter, The Today Show asked me about my stance on sick pay for part-time employees. I will comply with red-tape regulations . The problem with all of these good ideas in theory is that someone has to pay for them in actuality. I am all for supporting our employees. I am also for the government bolstering its finances but not on the backs of the tireless small business owners.

If we continue to weigh business owners down with unemployment tax, workman’s compensation, town fees, city fines, and so much more, someday and sometime there will be a law that breaks the business owners back. Although I am no business scholar, I can see that if you cripple the source then all that flows will eventually cease to trickle down.

When I asked an auditor about the seeming scrutiny, the auditor candidly confessed that if they don’t find something wrong then they will seem like they aren’t doing their job. I guess its as much about generating income for them as it is for us. At least someone is making revenue, too bad that someone is always Uncle Sam.

The rules have swung out of balance. As common sense continues to erode and we are knee deep in the muck of The Great Jobless Recovery, it seems that it would be an opportune time for someone to speak up. It is not going to take a someone though, it is going to many of us.

This isn’t about being on one side of the political spectrum. As a former social worker, I have a deep earnest compassion for all. As a former government worker, I also believe that as Thoreau so elegantly paraphrased, “the best government is that which governs the least.” It is time for a common sense infusion in this country. For it to get better, it is going to have to get simpler.

Happy Small Business Saturday. Let’s hope at this Saturday next year, we have even more small business to be thankful for!

One thought on “Small Business Saturday, Business Owners and Red Tape: Let’s Have a Ribbon-Cutting”

This site uses Akismet to reduce spam. Learn how your comment data is processed.

Where You Can Find Ann’s Work